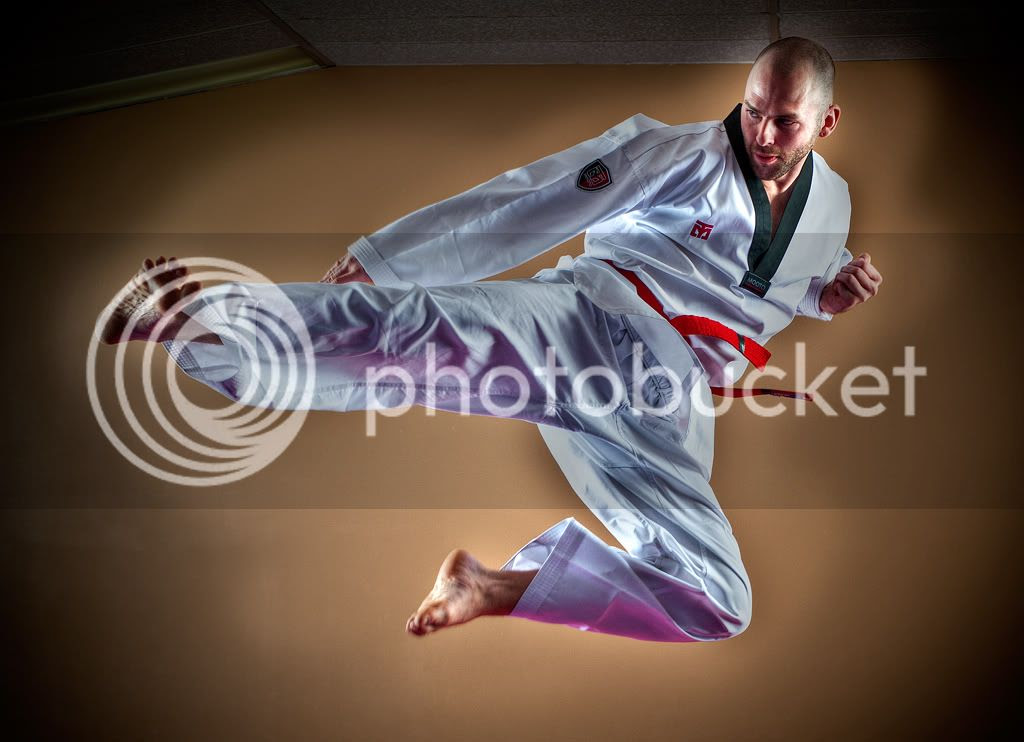 This is a little different image for me today.
I shot this against the dojo wall but it included some of the ceiling as well. I wasn't happy with the background to say the least but liked the lighting and action, post looked cool too (upped the clarity and ran it though photomatix).
All i did to darken the background down was to create a new layer and then ran the vignette three times on it set to max. I then created a mask and dodged it out a bit.
I am still not happy with the background and will perhaps try the image again, not sure.
I am excited and very much looking forward to a big shoot i have tomorrow so i may just have to move on.
Posted by righteye at 4:31 PM No comments:

Tonight i am trying to finish up a job i shot a couple weeks ago and have been doing alot of hdr on the photos since then.
I really enjoyed the shoot and am enjoying the photos even more, thanks "A".
This is a crop of a chair image that was in someones yard downtown. I ran the single image through photomatix and then sharpened heavily. I also added +33 to the saturation to get the color to how it felt to me when i shot it.
I have alot of images to prepare and once my clients website is live i will direct you there to view the rest.
Posted by righteye at 7:13 PM No comments: 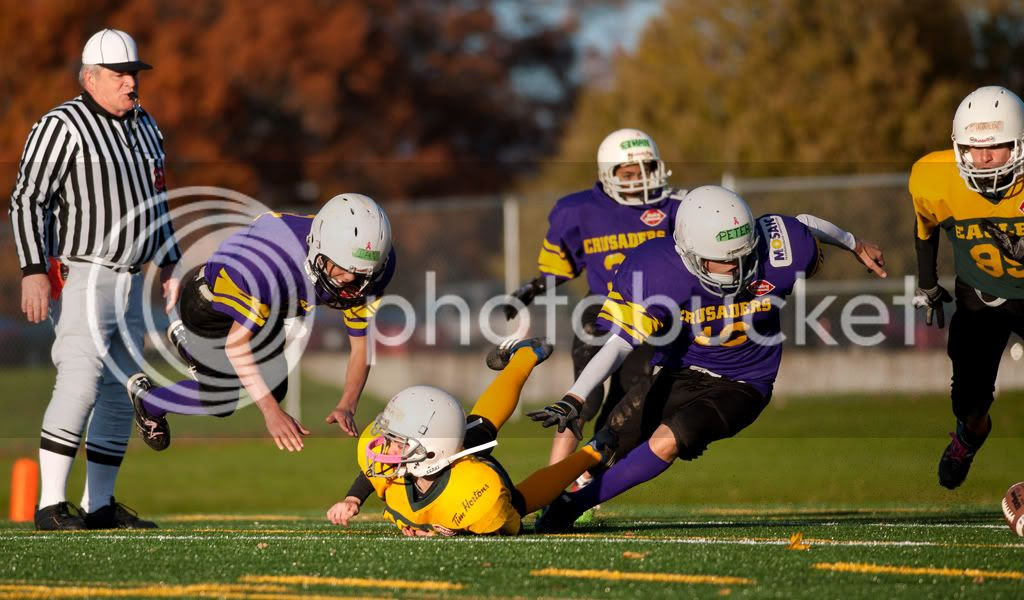 This is a shot i took at my sons football game today.
I thought the image was a little quirky with the ref, guy in the air, ball half in, etc.
Thus it had to be posted.
When i shoot sports by the way i like to be lazy. By lazy i mean that i turn my brain off and use aperture priority on my camera. This of course is not being lazy i know. The light seems to change so much that you could miss a great shot. The clouds blocking the sun just as your scene is unfolding would be one example. Aperture priority setting usually solves this and gets your exposure close enough. I also use the largest aperature on my lens (f2.8) to blur out the background.
Posted by righteye at 6:13 PM No comments: 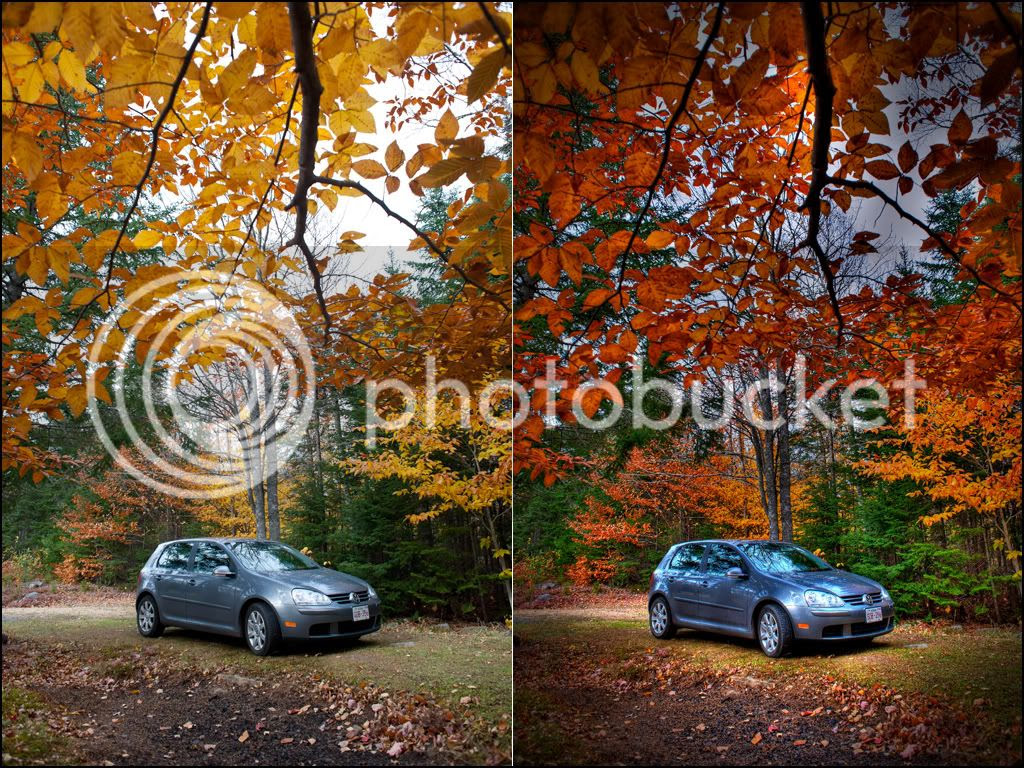 I took a couple minutes today on a visit to my parents to shoot a quick hdr of my car.
I used a tripod of course and bracketed 9 exposures. I chose three of the exposures and exported from lightroom to photomatix pro. I then added a heavy vignette and spent some time on curves to get the look i wanted. I also sharpened about 100.
I created a mask on my vignette layer and painted through to the unvignette layer underneath in the areas that i wanted to show through bright, like around the car and a line up to the top of the image through the trees.
The left image is the normal exposure with nothing done to it.
Posted by righteye at 6:06 PM No comments: 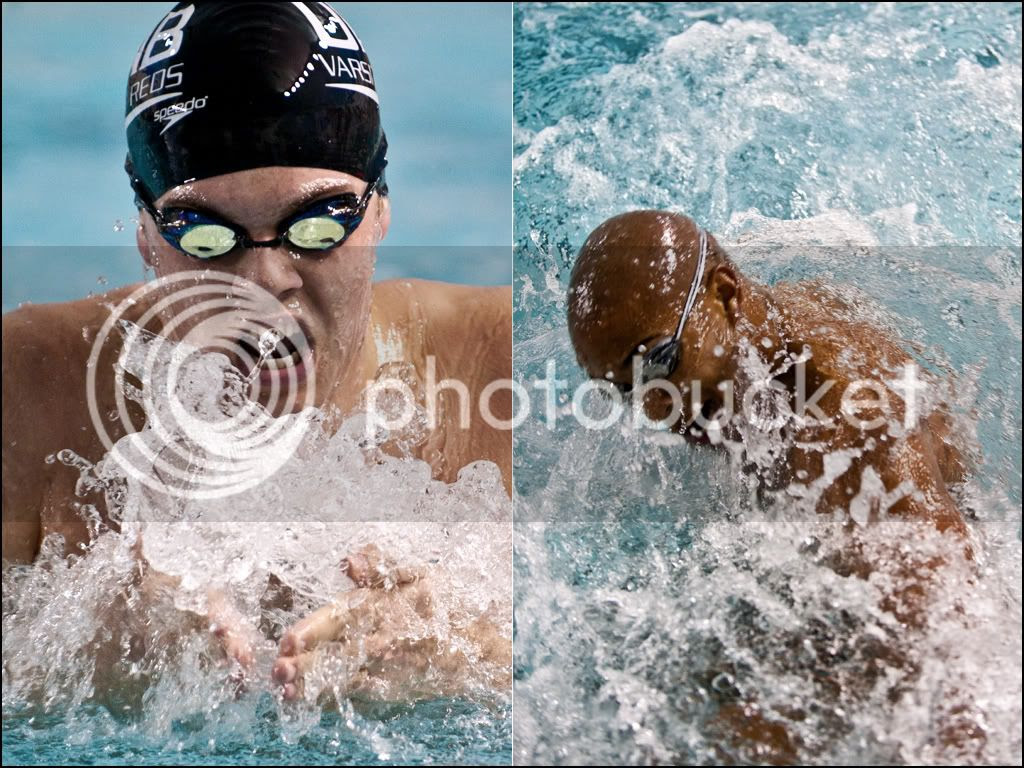 I shot some swimming action photos tonight and ended up being happy with a couple of them. Swimming is not the easiest sport to shoot i have found. First my camera and lenses were in my car for an hour or so before i went to the pool and as such were cold. The second i stepped on deck the lenses fogged and 15 minutes later were still fogged. I spent the next five minutes wiping them off with a lens cloth and was then able to shoot. I found out a few years ago that they do not like it when you bring in a couple off camera flashes, thus i was shooting in a fairly dark, wet area. My iso setting ended up being 2000 and my camera settings were f2.8 (70 - 200mm lens) and 1/400 sec. I ended up using aperature priority mode as the light fell off about two stops as they got closer to the edge of the pool. It worked out pretty good shooting horizontally but was a bit dark when i switched to vertical. The next tricky part was the focus. I used continuous focus tracking and continuous high motor drive. The camera however liked to focus on the water being splashed up in front of the swimmer. I think if i were shooting this sport for a living i would play with my cameras fine tune focus to tweak it just a bit further back. The only other problem i encountered was a huge splash on a swimmers turn that covered me, camera, and lens.
I shot 4gb worth and ended up with a few keepers and wet jeans from the knees down. Just another day at the office.
I played a bit in photoshop too by the way. I bumped up the clarity, sharpened, and lowered the saturation for a more muted look.
Posted by righteye at 5:49 PM No comments: 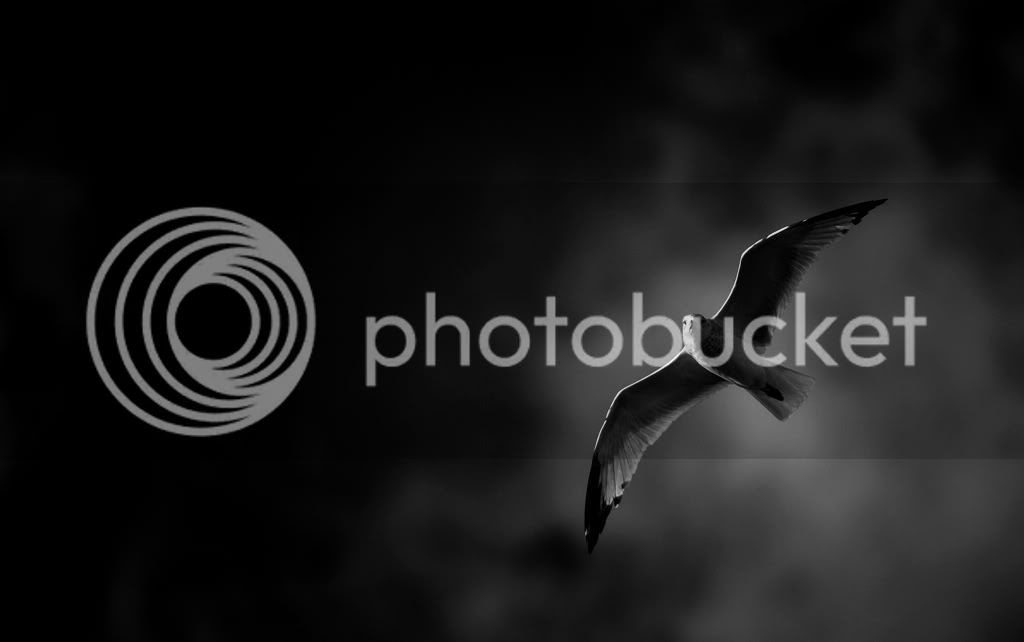 Another seagull. I know.
I have so much real work to do but yet it is 11:30 at night and i am sitting alone in the dark masking out this seagull that i shot today during my daughters soccer game. Crazy i know.
Its times like this that we often ask ourselves why we do the things we do. The answer for me is enjoyment and the satisfaction of creating an image that i am happy with. Everyone would have their own reasons of course but i think the one thing that photographers would share is the need to create images. Its like an addiction but worse, its part of who we are. Be it photos of seagulls, people, landscapes, or whatever. The subject itself does not really matter.
For this photo i made a duplicate layer and bumped the contrast way up with a curve and then changed the layers mode to multiply. This gave me a pretty funky sky but made the gull pretty well black. I masked out the gull from this contrast layer so it kept its detail in the underlying layer. I sharpened the photo and thats about it. The masking took awhile but i thought in the end it was worth the time.
Looking at the photo now i realize that i should have darkened the bottom right corner some more so your eye would stop there and bounce back into the image. Some sleep right now is more important however.
Posted by righteye at 7:18 PM No comments: 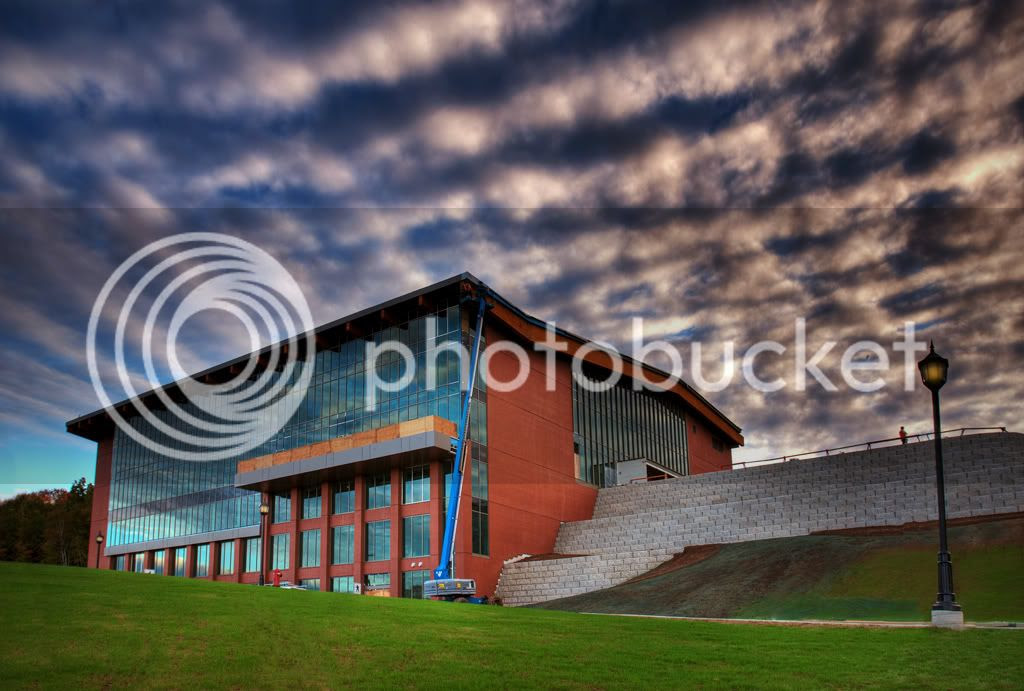 The sky last night was amazing. This photo does not do it justice unfortunately.
I walked out of a building beside this one after a shoot and i was tired. Actually tired may not be a strong enough word, you get the point. I got in my car and i drove 20 feet. There i sat and debated if i was going to go into the trunk, dig out the camera, set up a tripod, and do an hdr of this scene before me. It was a toss up, did i mention that i was tired, but in the end the sky won.
I set up a tripod and put a wide angle lens on the camera. I shot 9 bracketed shots, several times, and then hopped back in the car and came home.
I planned to wait and photoshop the image when my brain was functioning but again the scene won out and i had to download and process right away. I ran 5 images through photomatix pro and then opened it in photoshop. The building was distorted like crazy from shooting it at a low angle with a wide angle lens. I worked on a curve first just to see if i could make the image look good and then moved on to transform skew. This worked for the building but the lamp post on the right hand side looked like the leaning tower of pisa, but worse. I made a loose selection around the lamp post and then hit copy and pasted it to a new blank layer. I then hid the layer and retouched the post out of the background layer (selected it and filled using content aware). I turned the new layer back on and rotated it until the post was straight. I retouched in some problems with the grass in the center of the image, added some yellow to the lamps, and did a vignette. Sharpened the image and i was done.
I was still tired in the end but was glad i stopped the car.
Posted by righteye at 3:15 PM No comments: 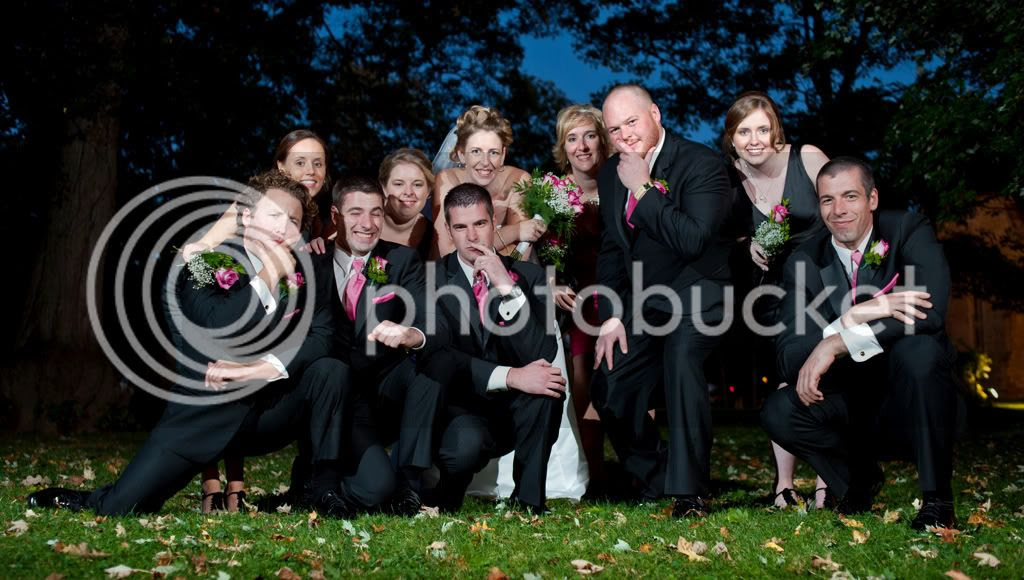 I shot a wedding this past weekend that started at 6:30pm.
Thus when the wedding was over the days light was also almost over. I really, and i mean really, did not want to shoot group photos in a hotel ballroom against a blank wall so i quickly set up two sb nikon flashes and went to work setting up groups. It is amazing how fast you can get them done when it is really cold outside and it is getting darker by the second. It was so dark in fact when i shot this one that my camera was having a really hard time finding the focus.
The ground and trees in the background were black so i had to lay on the ground, in my freshly dry cleaned pants, and use what little light was left in the sky to break up the black. The shutter speed on this one was 1/3 sec, f3.5, and iso 500. I used a 35mm lens so i could get closer to the group and shoot up at a steeper angle. Of course the camera was hand held.
If it wasn't so dark and cold i would have adjusted this group a bit. I would have preferred some of the people in the back to be a bit higher but i really had to compromise on this one.
The wedding was great, i was happy with the photos, and i slept very well when i eventually got home.
Posted by righteye at 4:34 PM No comments: