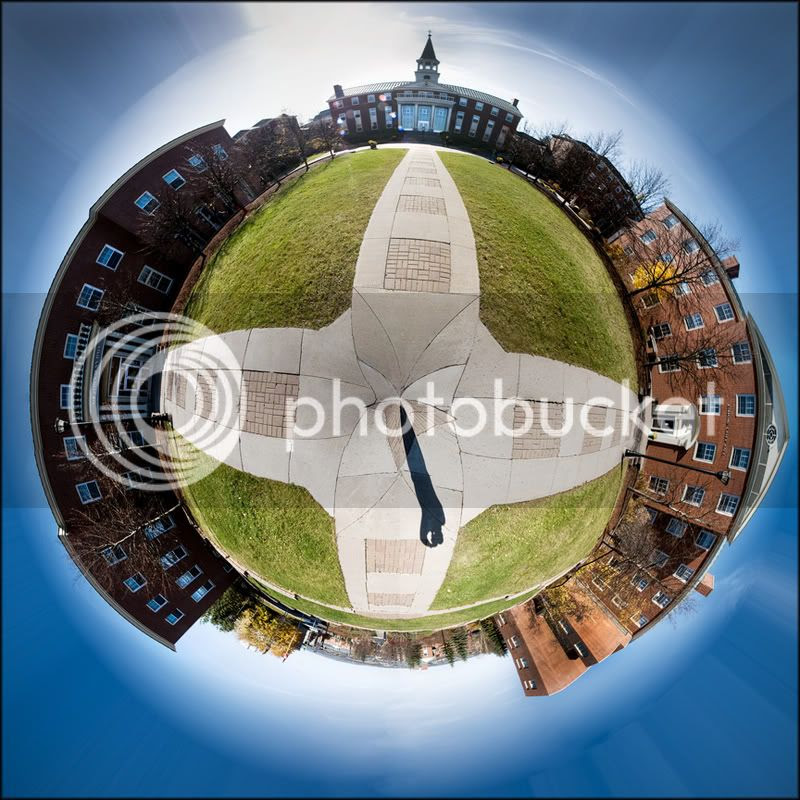 I was at a trade show a couple days ago and got a chance to meet and talk to a very good pano photographer. I have his web site address at work and will post it soon. He taught me how to do the planet panos that i have seen popping up on some flickr sites and i wanted to give it a try. Above is my first attempt and i have some work to do for sure.
I will not go into detail on the process as i have a link to it which explains very well what to do.
Just in case the site goes down however here is the short version.
Shoot a 360 degree pano and stitch it together using photomerge or whatever software you favor. The horizon has to be level.
Go to image size and make the photo a square (do not constrain the proportions). The photo will now look really bad but thats ok. Rotate the image 180 degrees and then go to filter - distort - polar coordinates.
You will probably then have some retouching to do but that is about it.
Check out this site for more detailed instructions
http://www.dirkpaessler.com/blog/index.php/photographers-tools/2006/09/06/tutorial-create-your-own-planets/
Posted by righteye at 7:38 PM No comments: 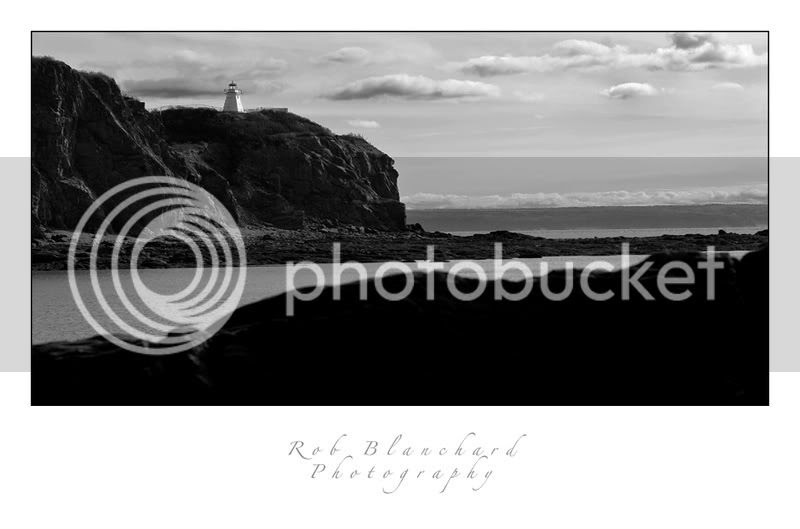 This image was shot with an 85mm lens as that was the longest lens i carried on this day.
I wanted a bit of drama in the shot which is why i included the foreground rocks. In photoshop i boosted the contrast a fair bit to make the blacks black. I duplicated the background layer and did a strong curves adjustment just to enhance the sky. I then created a mask and painted over the land in the top layer so the dramatic sky would show through and the normal forground. I selected the whole image and went to select - modify - border and entered 2 pixels. I then filled that selection with black. I then deselected and went under edit - canvas size and extended the canvas to allow for some printing under the image. I placed a grid line, by dragging it out from the ruler on the side, and placed it at the halfway point. I then selected the text tool and using the centered option i clicked on the gird line. I then typed my name and then selected the text and color i wanted.
Posted by righteye at 6:23 PM No comments: 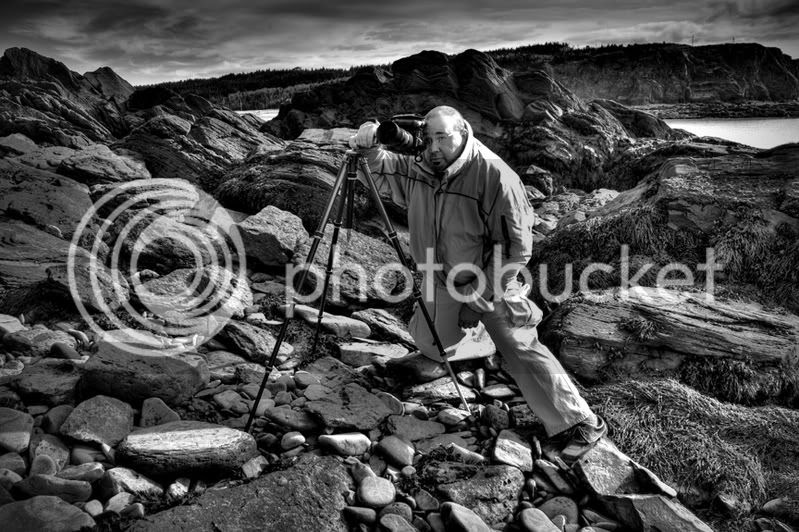 Here is another shot from my weekend away. I tried a bunch of different things and have tons of images to play with now, just no time. For this shot i used a 14mm lens handheld and bracketed 7 frames. I ran the proper exposure along with the lightest and darkest exposures through photomatix and cranked up the strength. I applied a curve once i had the image in photoshop and sharpened the image. I also did a vignette on this one, but not on the image below.
The image below is the normal exposure converted to black and white, sharpened and a curve to boost the contrast. 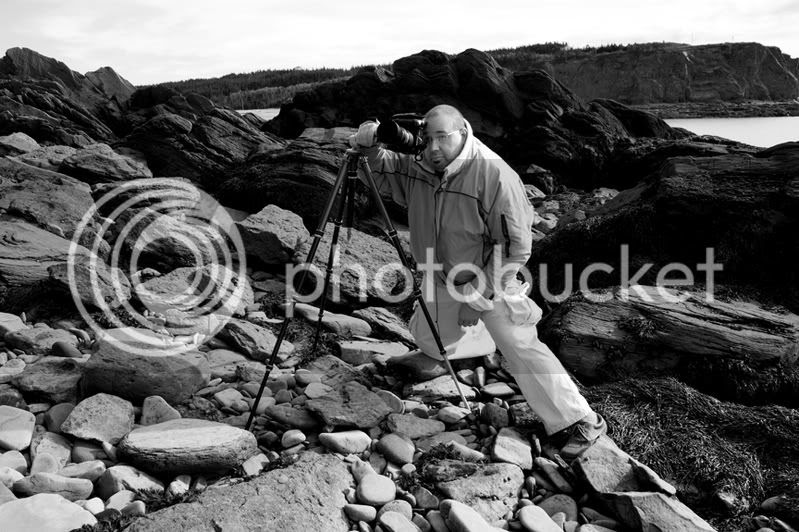 When doing a comparison here not only look at the sky but also at the seaweed to the right that in the original gets blocked up.
Posted by righteye at 11:55 AM No comments: 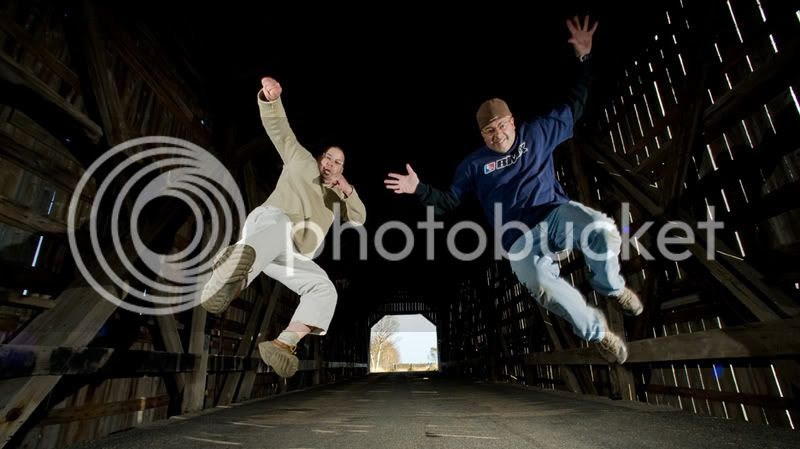 Like i said in my last post, things went down hill fast, kidding.
While still inside the covered bridge we set the camera on a tripod with a 14mm lens on it, thanks murray. I then took photos while gordo jumped at the camera. We then switched roles and it was my turn to jump. I had two flashes set up, one to each side and at about a 45 degree angle to where we would end up.
I opened the photos in photoshop and placed one on top of the other so i had two layers. I highlighted both layera and did an auto align layers. I then just created a mask and drew a very rough selection around about half the image with the lasso tool, refined edge to feather it a bit, and then filled that part of the mask with black. We were now both showing through.
Posted by righteye at 6:08 PM 1 comment: 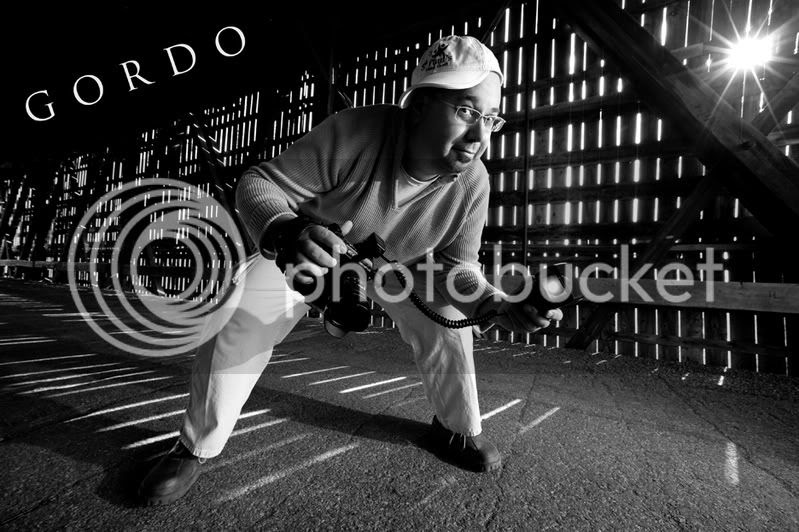 I did some shooting today with a good friend of mine at some different locations along the coast.
We of course started the day shooting some landscapes but as what typically happens when two photographers get together, the serious shooting quickly ended and the crazy ideas came out. We shot alot of really goofy stuff and then packed up and headed for home. We saw this covered bridge on the way back and decided to stop and have have a little strobist shoot. Strobist for those of you that dont know is all about off camera flash. Here i used one flash to camera right and drug the shutter to 1/8 sec to bring up the sun coming through the slats in the boards. That is the sun at top right, not the flash.
In photoshop i desatruated and sharpened and applied a circular gradient inside his flashes head to make it look like it was going off.
There will be several more shots from this shoot posted and you will see just how silly things got.
Posted by righteye at 6:32 PM 1 comment: 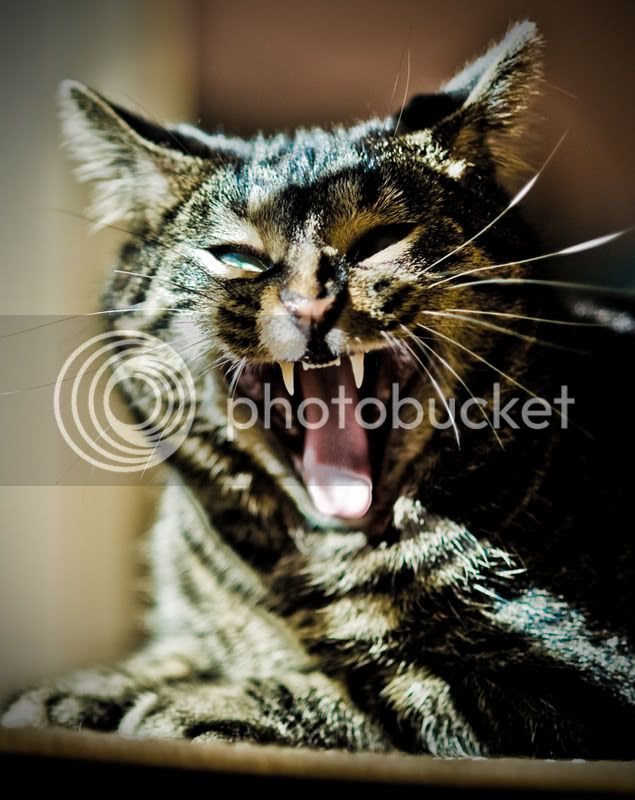 I didn't shoot this for any reason really. I was actually just trying out a lens i just got (85 f1.8) and the cat happened to yawn.
I did do the raw funky sliders thing to it and then just duplicated my background layer, went to filter-distort-lens correction and laid down a heavy vignette. Then just added a layer mask and painted in black to take the darkening from the vignette off the cats face. I sharpened, cropped (deciding the composition was the hardest) and was done.
Posted by righteye at 9:21 AM No comments: 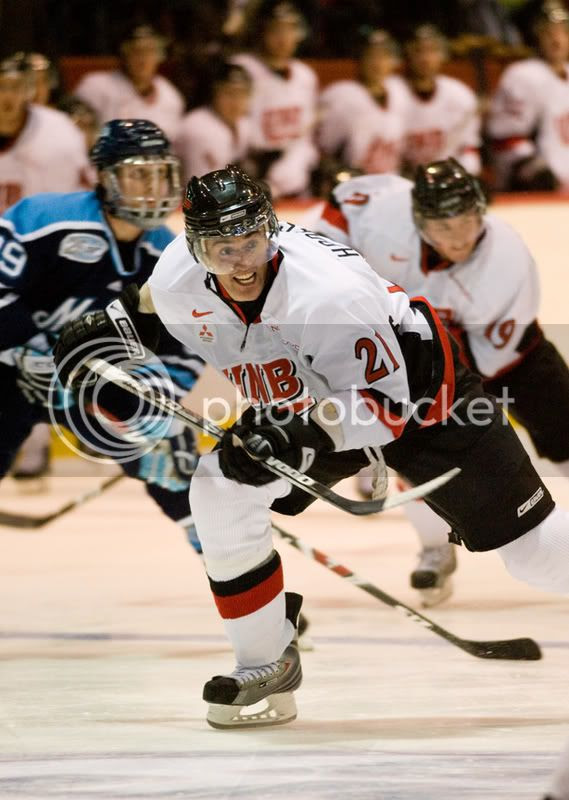 I haven't posted in at least a week and it feels like forever. I hit another busy stretch but that should level out soon enough.
I just wanted to throw up a quick image of hockey action. I shot this with the nikon d700 at 4000asa. The speed was needed as i was shooting through the glass (dirty) which takes away about one stop.
I shot the image in raw, uncompressed, and at 14 bit.
You can see lots of grain in the high res image but it holds up pretty good, especially compared to the d2x which would have added huge gobs of color noise.
The only thing i did in photoshop was a quick curve to lessen the cyan cast in the whites and i used the sharpen tool on all the logos on his jersey. The rule is to use the sharpen tool on any text or shiny things, like jewelery.
Posted by righteye at 5:19 AM 1 comment: 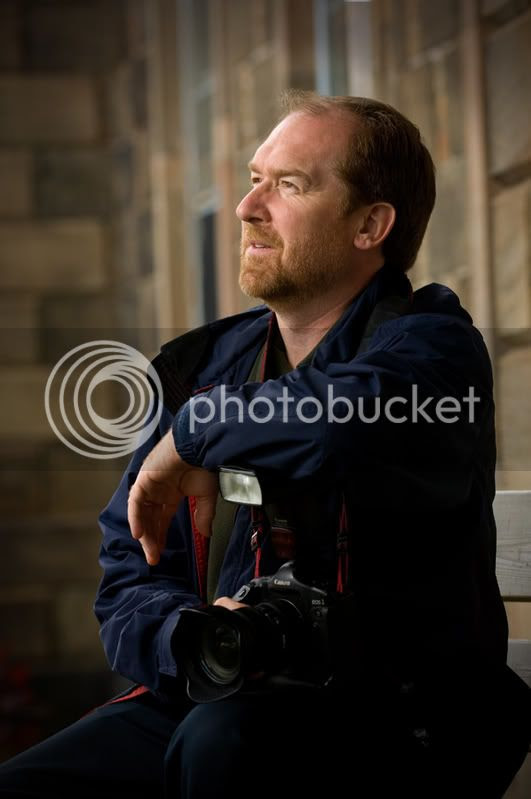 I was set up early for a portrait i had to do last week and my friend and fellow photographer graciously offered to sit in so i could check my light. Really easy light actually, one off camera flash shot through an umbrella. I mainly just needed to balance it with the ambient light that was hitting the background.
All i really needed to do in photoshop was to darken down the white trim in and around the windows behind him. I also retouched a bit, added a fairly heavy vignette and sharpened. I did a slight curve also but i usually always do.
A little note to a curve. To warm up an image a bit but not produce a noticable color case you can just slide the shadow point for green a bit left to add magenta and the shadow point for blue a bit left to add some yellow. This will just tint your blacks a bit and as a result warm your image up.
Below is a black and white that i played with in camera raw.
I much prefer the color version but added the other just for fun. 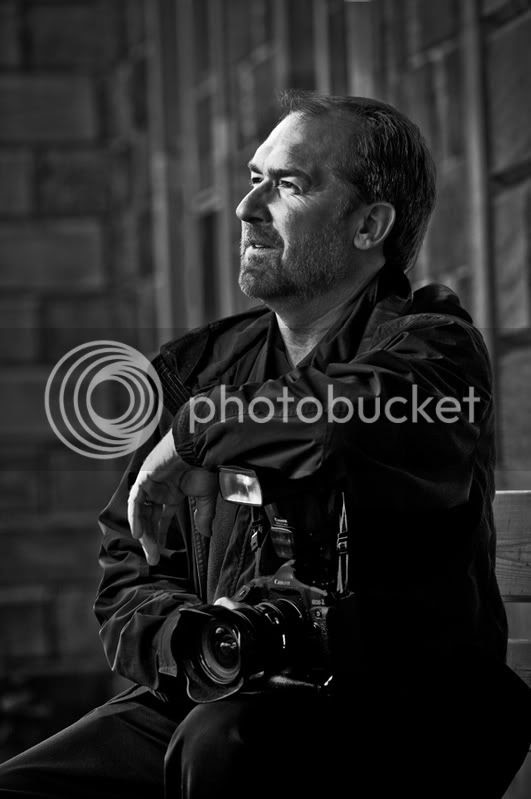 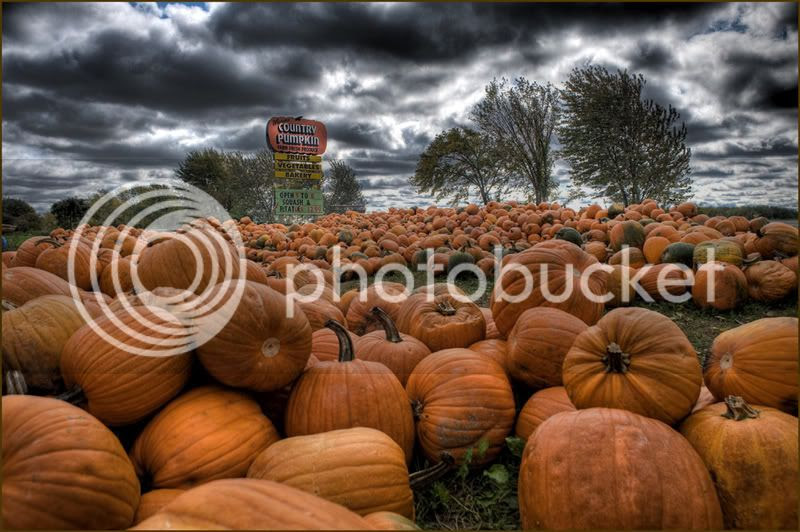 We picked out our halloween pumpkins today and I just so happened to have my camera in the car.
I shot seven shots bracketed by a stop each hand held.
I ran the normal exposure, darkest and lightest through photomatix.
I set the strength to the max and once again just played with the sliders until it looked right. The pumpkins however never looked right.
I opened the image in photoshop and placed the normal exposure image on top of the photomatix image. I placed a layer mask on this normal top layer and painted over the sky and trees with black so the photomatix layer underneath showed through. I then lowered the opacity of this top layer to about 40 percent to blend it in with the photomatix pumpkins.
I sharpened the imgage and then used the dodge tool set to highlights and used it on the orange sign to make the light look a bit more mottled. I lowered the saturation of the image by a bit also.
The normal exposure image is below. 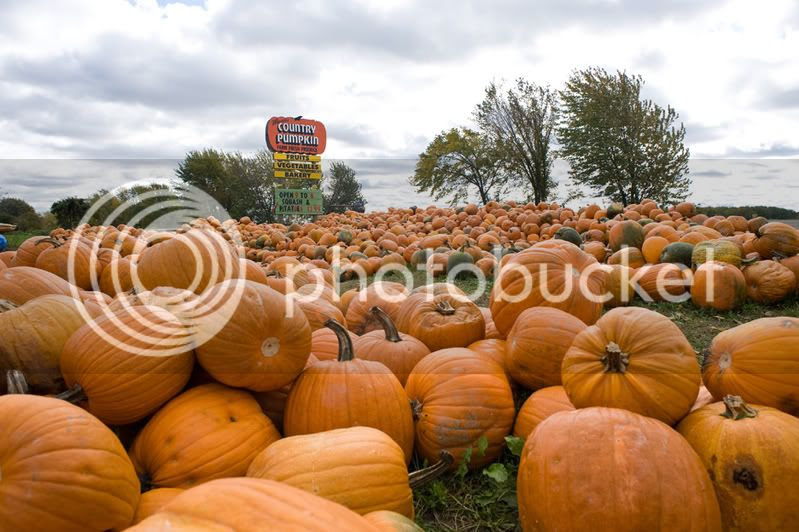 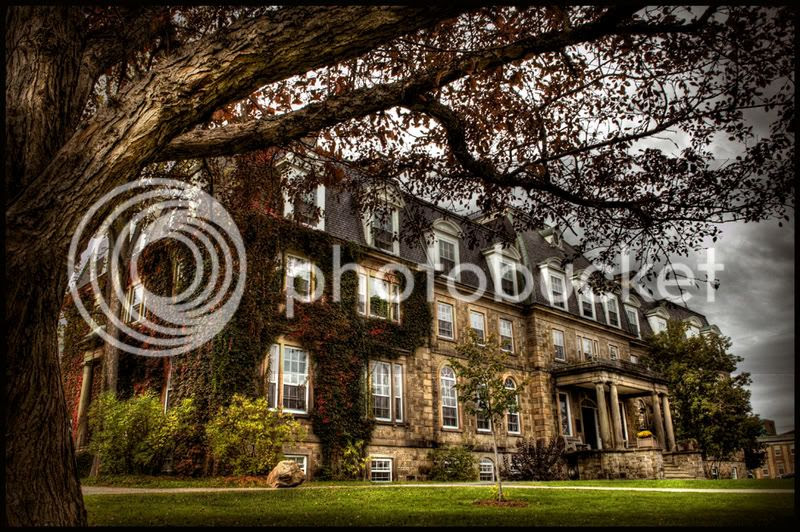 I showed up early the other day for a shoot and ended up with a half an hour with nothing to do.
Might as well take a few photos i figured.
I set the camera on a tripod and bracketed my exposure over a 7 stop range. I wanted to see what photomatix would give me as i have not had much luck with it lately.
I ran all 7 images through photomatix and played with the setting quite a bit until i got the look i wanted.
I turned the strength all the way up and lowered the color saturation a fair bit. My other sliders ended up being quite far the the right side of the screen also (sorry as i did not mark down what they were). Once i was done with photomatix i saved the image as a tiff and opened it up in photoshop.
I did a bit of retouching and then duplicated my background layer. I applied a fairly heavy vignette in filter - distort - lens correction and then applied a layer mask and painted in the areas that i wanted to keep light (background). I then used the dodge tool set to highlights and a strength of about 8 to paint over the right side of the building a bit, was pretty dark. I hit the tree a bit also with it and some areas of the building. I then used the burn tool set to midtones and a strength of about 8 and darkened up the left side and middle of the building. I used this on the tree a bit also.
I then smart sharpened and did a curve to adjust the colors and was done.
I put the original photo below. 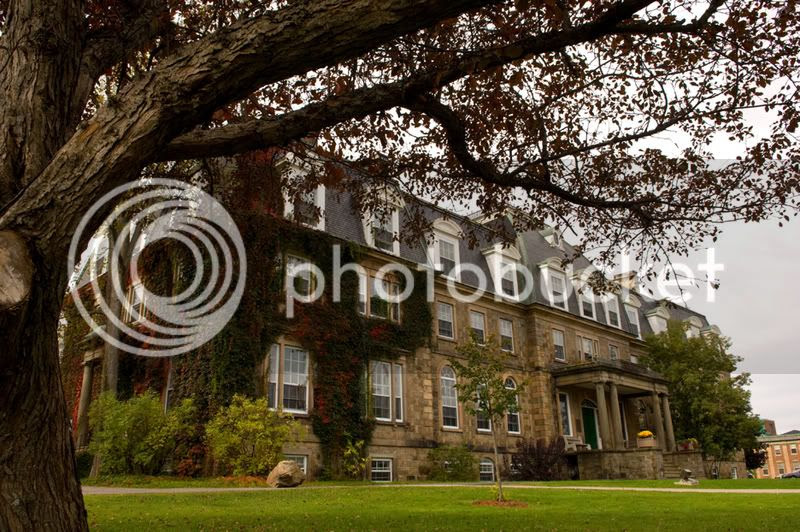 Posted by righteye at 2:07 PM No comments: