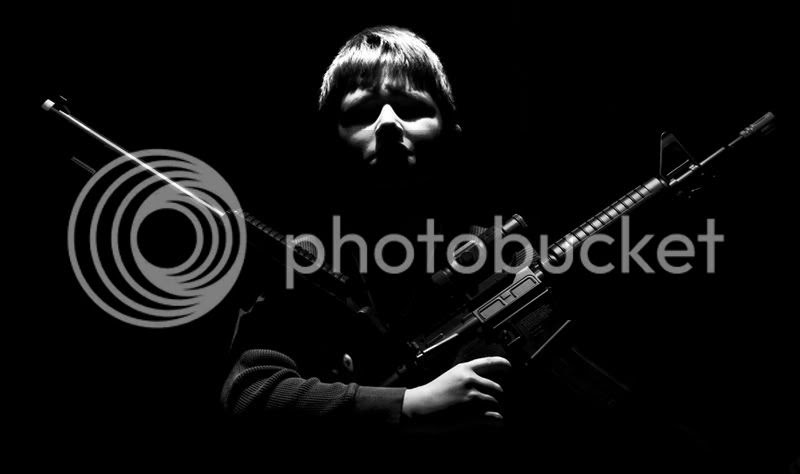 Before you think i have given my son weapons for christmas let me assure you that they are just toys. We watched a war movie last night which prompted him to run and grab them from his room. I thought i would do a shot while he had them out and since i havent taken many photos lately, vacation, i was in the mood to shoot also.
I put one light behind him and pointed it straight down at his head. I wanted black eye sockets and a very contrasty look. We were just in the living room here but the background went black as no real light spilled on the walls.
I put it in camera raw and slid the contrast, clarity, and vibrance to 100. I kept the recovery and fill light down as they made some weird effects happen in the image. I took the saturation to -100 and then hit open.
I did a bit of retouching, mainly the light stand that was directly behind his head and some other little spots that showed up. I also did a bit of a curve to bring up the contrast just a bit more and sharpened.
Posted by righteye at 12:00 PM No comments: 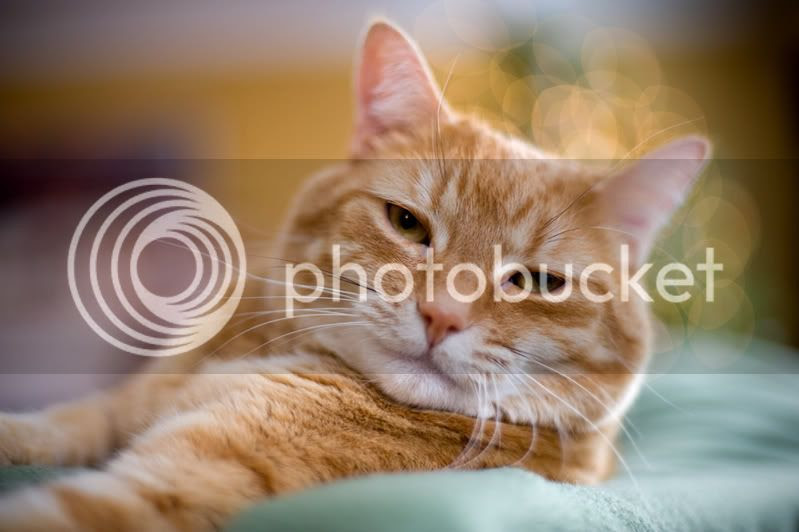 This photo of our cat pretty well shows exactly how relaxed and content i am feeling today.
I shot this wide open at f1.4 with my 50mm lens. By far my favourite lens right now.
Enjoy the rest of the holidays.
Posted by righteye at 8:51 AM 1 comment:

I will not be posting much over the christmas break as i am indeed taking a break. I do have a couple shots lined up to be posted but they will be pretty light.
Here is what we did today. Thirty centimeters fell last night and then blew all into my driveway.
Posted by righteye at 6:15 PM No comments: 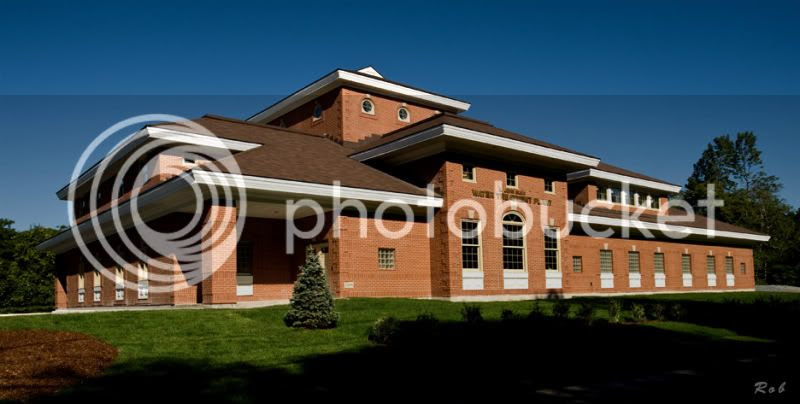 Seems like iv'e become a bit of a building photographer.
Not really.
I felt bad for not posting forever and looked through my folders to see if i had anything i could play with.
This is a shot i did for one of the companies that helped create this building. They are great clients, like all of mine, so i spent some time taking a few extra shots for them (all of the shots they needed were inside this building).
The photo looked fine without doing anything to it but of course that would be quite boring as i have a perfectly good copy of photoshop on my computer just begging to be used.
To punch it up a bit i went to my channels palate and copied the red channel (just selected all and went to edit - copy).
I then created a new layer and pasted this red channel into it (edit - paste).
I changed the new layers blend mode to multiply and lowered the opacity to 40%. This muted the colors and tones a bit so i went to my background layer and applied a curve where i increased the whites and blacks on the curve, just to pop the contrast a bit.
What this new layer did was to darken the parts of the image that were not red, like the sky and grass.
Posted by righteye at 11:12 AM 1 comment:

I had to shoot an event for client that happened outside, at night, in very cold temperatures.
The event was a city hall christmas tree lighting and then a $2000 money drop from a fire truck boom.
First thing i did of course was head to the fire chief and check to see if i could get up in the boom to shoot the crowd. With number one task checked off i then had to figure out how i was going to show the crowd of people. My widest lens is a 24mm f2.8 which got fairly wide but not enough to really show what was going on. I had two flashes with me and three pocket wizards but really what good was that going to do with a crowd this size.
So pano with natural light was quickly decided. I turned my camera to the vertical position and took as many shots as i needed to cover approximately a 180 degree shot. I think it ended up being 7 to 10 shots. I shot at 3200iso which ended up looking really good.
Once back in my warm office i opened the photos in camera raw and adjusted the settings and white balance, which was pretty yellow and green. After hitting done in camera raw i went back to bridge and under tools - photoshop - photomerge. I selected my raw files and hit go. Other than cropping the final images i did nothing else to them at all.
Below are a couple more shots. I didn't spend as much time on the white balance as you will see.

Posted by righteye at 5:18 PM No comments: 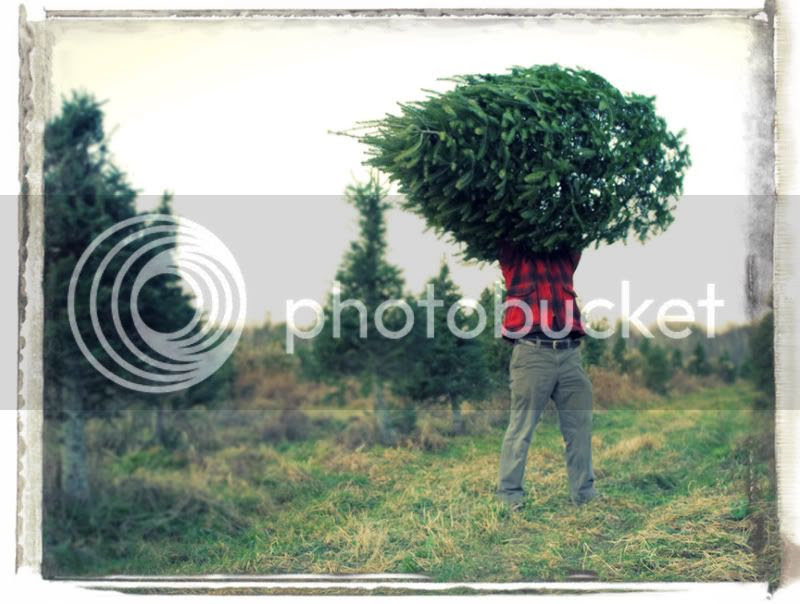 For some reason i got this idea in my head for my christmas card this year and could not shake it.
I started this process by borrowing a hunting jacket from my neighbor, thanks john. I then got up nice and early this morning and luckily did not have to go far as there is a christmas tree farm just down the street from my house. Driving there i almost turned around a couple times (even though it only took 1 minute drive) as i had no idea what i was going to do once i got there. When i pulled in i saw that someone had a fresh tree cut and it was laying on the ground. I started by doing some shots of me dragging it around and then, as usual, and gordon could confirm, it went down hill from there, mentally that is. I picked the tree up about a dozen times and tried to time it with the self timer on the camera so i would not have to hold it that long. It was heavy. The shoot was over when i could not feel my hands anymore, it was freezing cold.
Back to the warm office and i opened the images in bridge. I selected my photo and then opened it first in camera raw and then photoshop. I had the idea of using a cross process look so i didnt really do much in camera raw.
I will not go into the cross process technique as i just got a tutorial off the internet
(http://www.photoshopsupport.com/tutorials/or/cross-processing.html). I may have tweeked it a little but not much different than the tutorial.
I then wanted a grunge border and again went online
(http://www.640pixels.com/articles/free-photoshop-grunge-borders.aspx).
I opened the border and drug it onto my image. I then went to edit - transform - scale and made it a bit bigger to fit. I also selected the very bottom little line and moved it up a bit.
I then wanted most of the image to be more blurred so i duplicated my background layer and added a gausian blur. I used a layer mask to see through to the background for the parts that i wanted to keep sharp.
I was very happy with the end result.
Before i even took the photos i had envisioned the entire process from start to finish and it did not change once i got started.
I will talk more about this very soon.
Posted by righteye at 12:06 PM No comments:

I had to do some photos recently for the New Brunswick Youth Orchestra and one of them was a group. This had to be shot during a concert and i was at the far back wall of the balcony. Just before starting after the intermission the group did a quick pose, approximately 1 minute. In a perfect world i would have liked to move the mic at the front of the stage and placed some of the people so i could see them better.
I shot under the available tungsten stage lights and found out that my camera, nikon d700, has an amazing auto white balance. I have tried it out in a few situations and it has always been spot on. I used a 50mm f1.4 lens on it.
Once opened in photoshop all i really had to do was balance out the brightness levels a bit. The conductor at the front was very bright and the people at the back were quite dark. I opened the image in camera raw and when i was done with the settings i held down the shift key (changes the open to open object) and opened the file as a smart object. I then went into layer - smart objects - new smart object via copy. This duplicated the background layer as another smart object. You can then double click on the top layer and it will open in camera raw. Do your adjustments for the conductor and hit ok. I then just used a layer mask to put the new, darker, conductor into the background layer. I flattened the file and then opened the original file again in camera raw. I tweeked it for the people in the background and opened the image. I drug it onto the other file i was working on and used layer masks again to blend the two together.
I did a bit of retouching, sharpened, a little color adjustment curve and was done.
Posted by righteye at 2:46 PM No comments:

The posts have slowed to a crawl once more as my work load continues to pile higher every day. I am however almost caught up so took a minute to do a quick one.
This is a shot of the St. Andrews Algonquin hotel (canadian pacific owned). I shot it a couple weeks ago and thought it might make a nice pano. I stood fairly close to the hotel so it would distort a bit. I have come to like the bowed effect i get in the area that is closest to me in the photo. This is made up of 8 or more vertical shots hand held. I selected them all in bridge and then went to tools - photoshop - photomerge. I chose auto and it went together perfectly.
I am not sure how the color will look as i am using a laptop monitor.
Posted by righteye at 3:28 PM No comments: