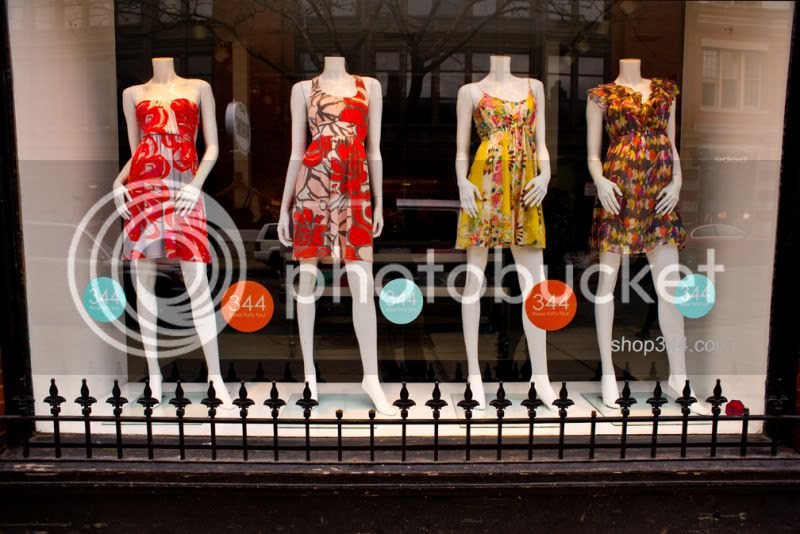 There was no snow in boston and the weather was very nice. It really felt like spring and this photo said spring to me. Of course i am home now and it has been snowing ever since. Last i heard we were getting 10 - 15cm tonight.
In this photo i wanted the colors to pop a bit. I increased the saturation in camera raw to 60% and increased the clarity slider, black slider, and exposure to bring up the contrast a bit. I also did a slight curve in photoshop to increase the contrast in the midtones.
Posted by righteye at 7:22 PM No comments: 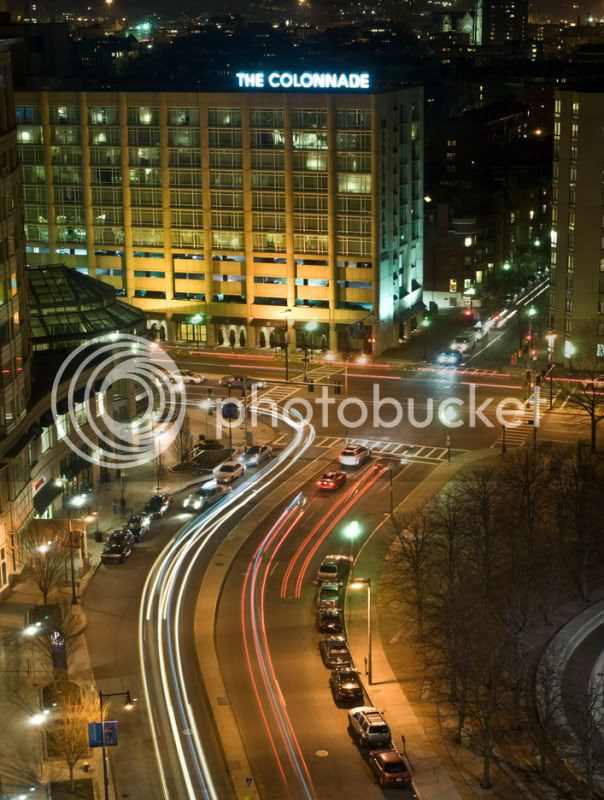 I noticed while in boston that my friend matts room overlooked an intersection below and a street leading into it. I had a tripod with me so of course a nice long timed exposure streaking the cars lights was in order. The proper exposure here was 15 seconds at f13 at iso 125. I turned off all the room lights but was still a bit worried about a back wall showing up in the window so i held a black jacket behind the camera while it was exposing. I took a bunch of photos and am going to overlay them in layers and mask out everything but the streaks to make more of them in the shot. Unfortunately there were not many cars on the road that night.
Posted by righteye at 4:42 PM No comments: 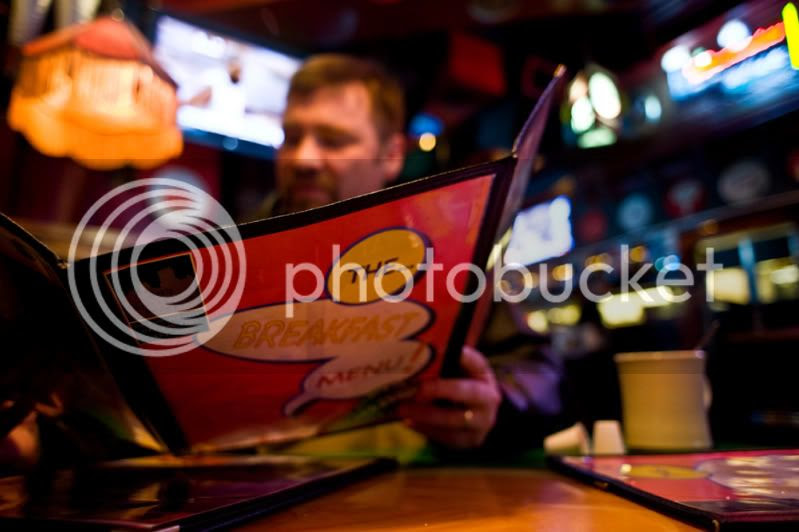 Just another shot from boston. I have shot a fair amount of images in the past week and will be having some fun with them once i am home and have some time. I only have two weddings to get out the door next week and then its on to the fun. I am actually really looking forward to the wedding shots as i was very happy with them.
This shot was brought a little more to life by increasing the saturation and decreasing the vibrance. I wanted to have the red menu stand out and be pushed even more to the foreground, bright color will seem to be closer to the viewer.
Posted by righteye at 9:39 PM No comments: 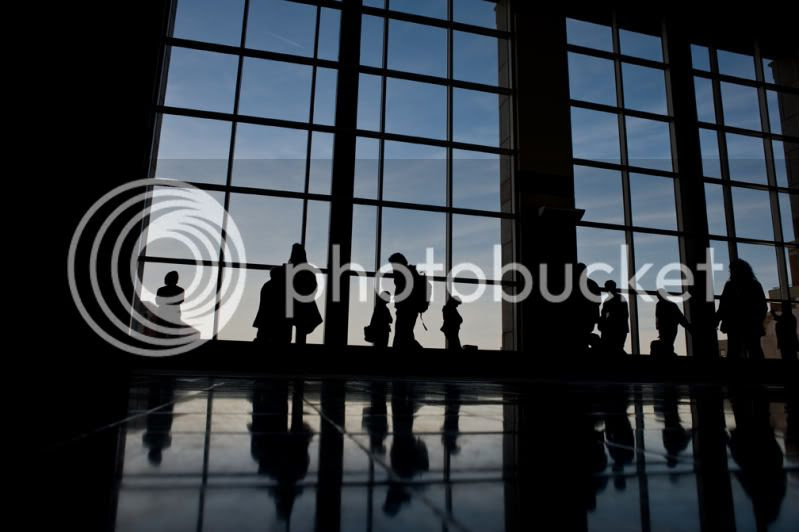 I have walked by this bank of windows for the past three days and finally captured them in a neat way today. I tried some shots from regular height of my eye and then tried placing the camera on the floor and shooting on an up angle. I shoot with the camera away from my eye alot. I like the angles i can get plus the surprise of seeing an image that i really did not see.
I processed this one in lightroom because i finally learned today that i should be using it more. Now i know that my buddy gord is rolling over laughing saying "i told you so". I am slow to change old habits but i saw a couple classes on it today and feel that i should now use it more.
The image is untouched other than camera raw adjustments for blacks and exposure. These were also minimal. I did use a bit of recovery to keep the sky a shade of blue that looked good. I also sharpened the file by about 50 percent.
Posted by righteye at 10:10 PM 1 comment: 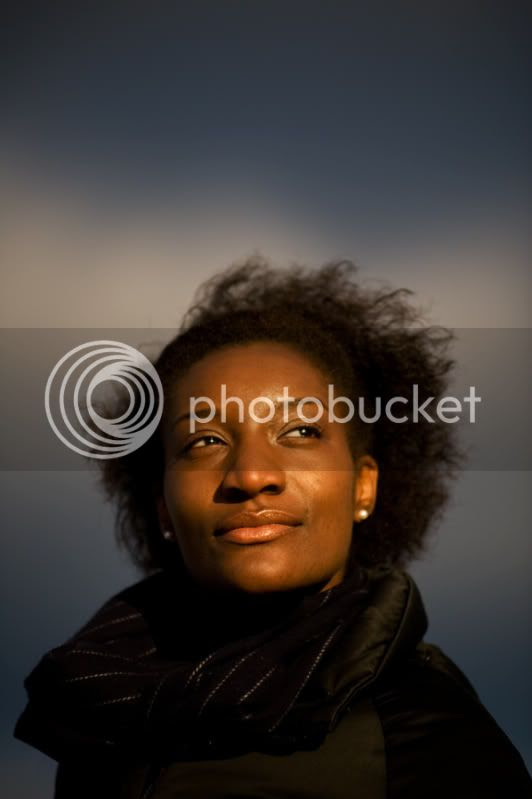 This is the model that the previous group were aiming at. I have a few shots that i liked but really could not decide which i liked best. I will post a couple more tomorrow. This is just natural light with the sky as a background. I really did nothing in photoshop except use the sharpen tool to sharpen the eyes and lips a bit. I dont think the skin could have handled being sharpened.
I was using a 80-200 lens at f2.8.
Posted by righteye at 9:06 PM 1 comment: 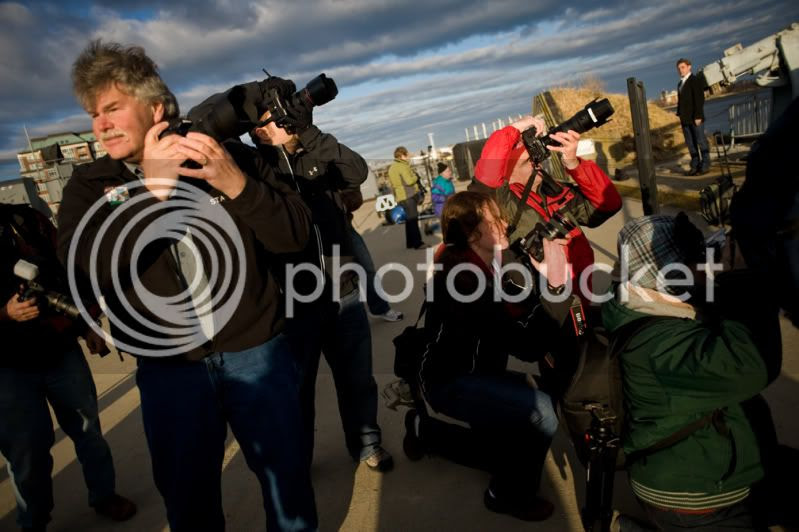 Here is another shot from the nikon safari.
Moose peterson is the guy on the left and i found this image funny because you see everyone shooting in the foreground and the model standing in the background. There were four models is why. My next post will show what everyone was shooting.
Posted by righteye at 8:55 PM No comments: 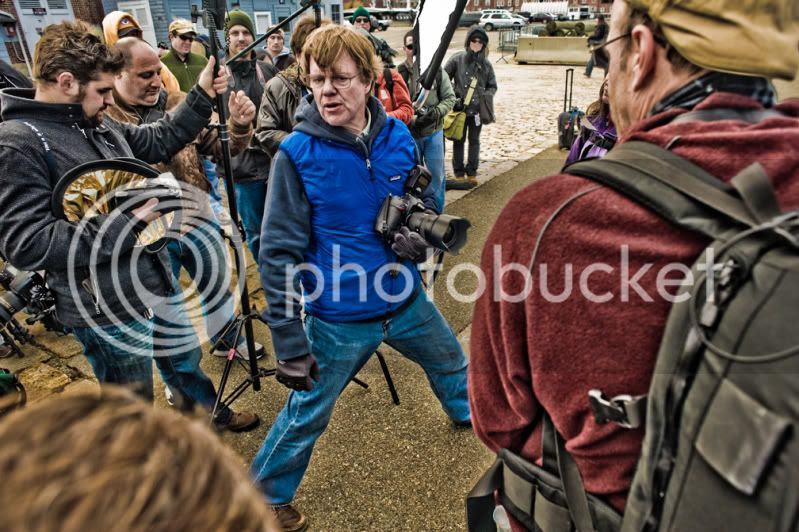 I was very glad today that i got a chance to watch joe mcnally in action. I have read his first book and look forward to his second which i will pick up tomorrow. Although the session was mainly aimed at people just starting out using off camera flash, and it was a touch on the cold side, i still enjoyed it very much.
The three of us that went from my office mainly took photos of each other which was fun.
Posted by righteye at 7:16 PM 1 comment: 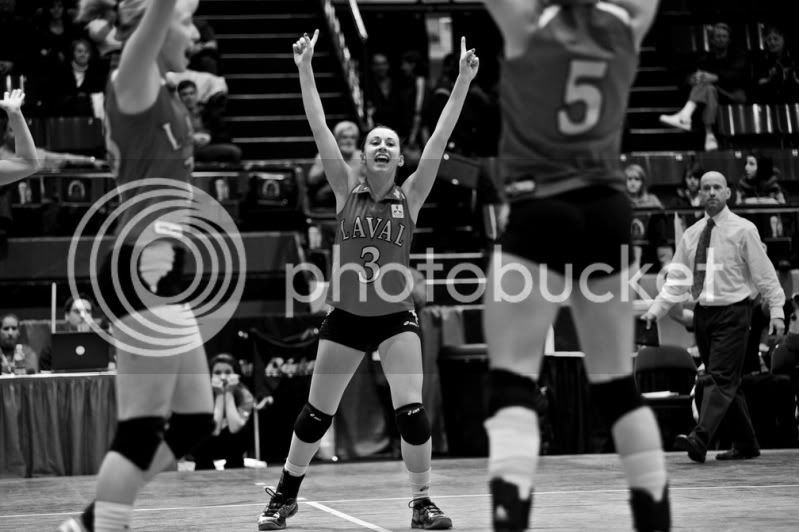 I of course got very busy and didn't get a chance to post for the last few days.
I am shooting a ton next week and will have lots and lots to post.
Posted by righteye at 1:36 PM No comments: 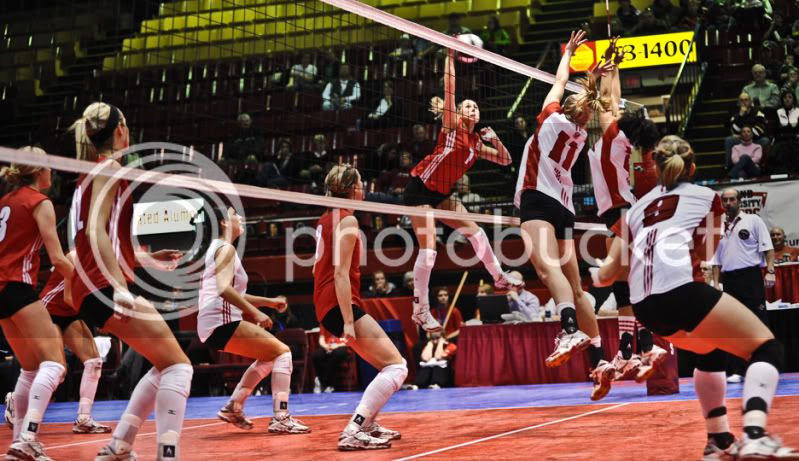 I shot something like 10 volleyball games a couple weeks ago and have been meaning to post some of the photos i took. My job, volunteer, was to take 20 - 40 shots a game and then download to a laptop for the organizing committee of the national womens university volleyball championships. They would then send these images off after the games to accompany the results, to who i am not sure. They were not for press, i know that much.
When you shoot that many games in the span of three days you start to look for different angles. I tried to not make any two games photos look the same. I stuck to my long lens (80-200 f2.8) but moved around alot. I have always liked shots from the game that are away from the action and since i wasn't being paid and was taking upwards of 40 photos, i could take some of these type of shots to go with the action photos.
I chose this one to start with, not because it is the cats meow of action photos but because it contained 9 out of the 12 players on the floor at that time in a relatively small area of the court.
I had a great time, got to play, and got some photos i really liked. This was also the first time that i have ever shot jpegs with my camera. I was nervous really, just like shooting film again. I even set my shutter speeds in the menu to 1/3 stops to fine tune the exposure.
I will post a shot or two a day for the rest of this week from that set of photos.
I will be shooting in boston for a week soon and will be posting photos from there, so many photos to come in a short period of time.
Posted by righteye at 5:45 PM No comments: 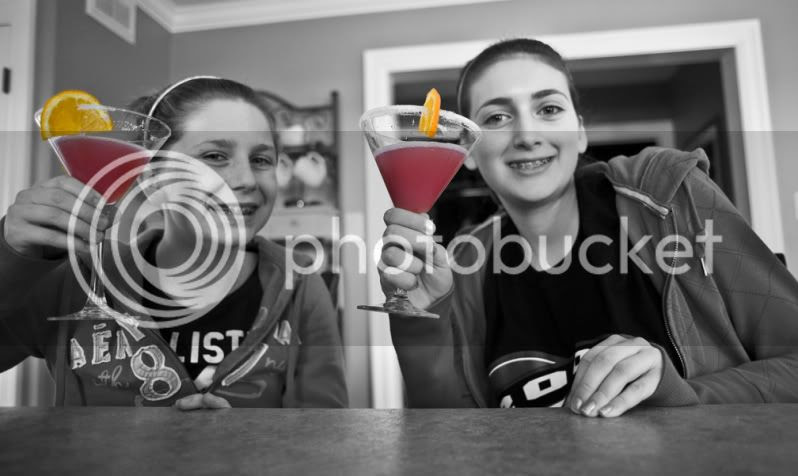 It was martini time last night and the girls had to do the taste testing, before any liquor was added of course.
I tend to use alot of off camera flash but one thing i always do is evaluate the ambient light first. This only takes a second and in this case no extra flash was needed. I put the iso up to 800 and had a fairly shallow depth of field using a 24mm lens. There was stuff in my way on the counter so i put the focus on face detection and just held the camera down at counter level and shot blind. A few of the images were out of focus but of course i took enough and managed to get a couple good ones.
Once in photoshop i put the clarity on 100% and opened the image. I then duplicated the background layer and desaturated this new layer. I applied a curve to that black and white top layer to make it look the right contrast and then added a layer mask to it.
I painted in black at 100% on the layer mask so the color of the drinks would show through from the color layer below.
I sharpened and thats it.
Posted by righteye at 9:01 AM No comments: 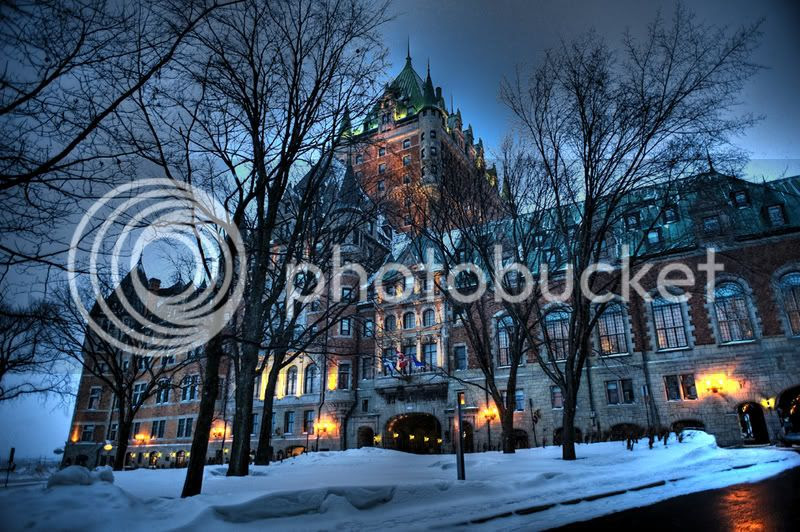 This is the chateau frontenac in old quebec which was also a cp hotel (i posted a shot of the algonquin hotel a ways back). I hand held the camera and shot 7 bracketed frames. I choose the lightest, darkest, and the proper exposure and combined them using photomatix. I opened the image after in photoshop but only sharpened.
I kept the tones quite cool in color just as a personal choice.
Posted by righteye at 5:56 PM No comments:

We took a trip to old quebec over the march break and had an amazing time. I took about 400 or so photos and thought i would post some here. This scene is just outside the walls of the old city where they have a skating rink and you can buy maple syrup on a stick.
This is a pano that i shot 360 degrees, a total of 19 images. I stitched it together using photomerge in photoshop and then cropped this section out of it.
Believe it or not they have the coolest bathrooms in quebec that i have ever seen. I will post a couple shots of them soon.
Posted by righteye at 4:54 PM No comments: 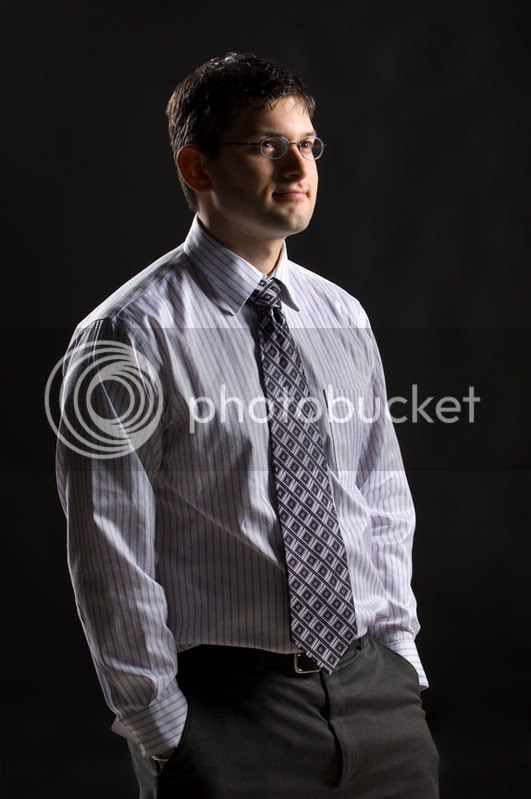 Sometimes i notice that you can get pretty safe with portrait lighting. Lots of fill, not too dark shadows, nice soft light, etc, etc. I would certainly be guilty of this as it is way easier to stay safe and make sure that your subject looks ok. I do have my fun at times no question and this was one of those.
I woulden't say that this is an exceptional shot but i was happy with the light and balance of it.
I used a reflective umbrella to camera right and put up a rectangular piece of cardboard to gobo the light from his shirt, which was getting blown out. I used another reflective umbrella placed in behind the subject and to the left a bit. I just put them pointing at each other really and both at 45 degrees to the subject or close to that anyway.
Thats about it for lighting, but you should feel free to play with those angles and try some different things.
The problems that showed up can be seen below in the raw image. There was a light reflection in the glasses and his ear ended up being really red and bright as the back light was shining through it.
I fixed the glasses by choosing the next frame i shot that did not have the reflection in it. I made a selection of that area and blended it in but rotating it a bit and using transform a bit. I dodged the ear with the dodge tool set to midtones and the tolerance set to about 15%. I did some other retouching and sharpened a bit and had it done.
I have been shooting a ton of images lately and will be putting up many posts in the near future. 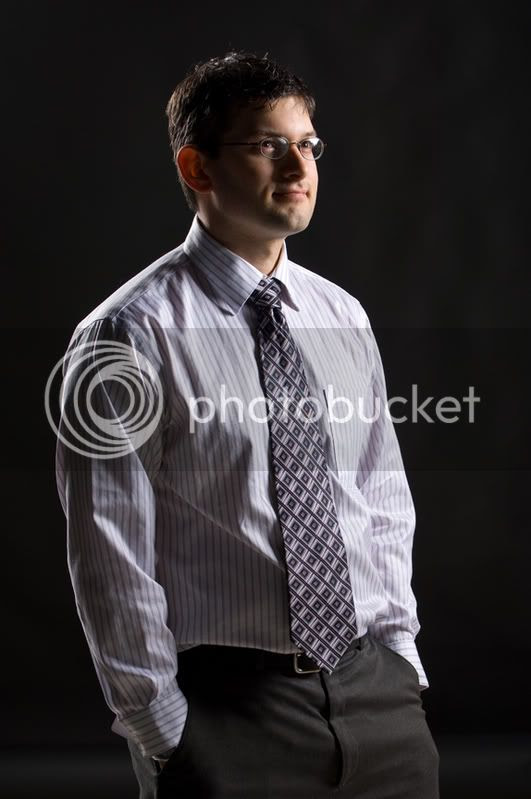 Posted by righteye at 5:07 PM No comments: